again...I'm soooo behind!  When will this organized side of me catch up?
I am going to learn to say "No" this year.
right......

On a higher note I just learned tonight that the artist, Darren McGrath painted one of my barn photos.  This same photo may be chosen in a local contest for a calandar!  Exciting!  Yall know how much I love shooting barns!  How thrilled I am!

and here is Darrens execution of it.  I think he did a remarkable job!! 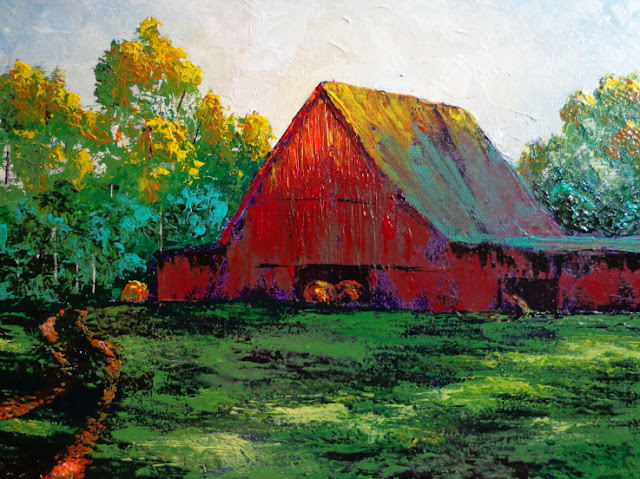 I would never be brave enough to choose a violet but he pulls it off in a brilliant manner here!!!

Keep your fingers crosses to see if it's chosen for the 2014 calandar!

By the way....For those that don't believe in Santa...He does still exist!
I received a call from an unblocked phone number telling me to proceed to the local Best Buy and tell them my name at the "customer pickup counter".   Now mind you...It's a wonder I didn't hang up the phone at first but I continued to listen.  My daughter and I were going Christmas shopping that night...what could it hurt?  So while she waited with the Jersey girl in the car I was asked to show my I.D.  (This is when I thought, yeahhh..now they're gonna ask for a credit card or a payment of some sort)  However...she said I have one problem, "We don't have the tripod in stock that you are suppose to be picking up".  Thinking that I'm correcting her I said, "No, it's a camera.?!"  it came out sounding more like a question than a statement.  That's when she said, "Oh, We have the camera right here."  My mouth fell open and I know I gasped!   She looked at me like I with concern and said, "Is this one okay?"   ...........Okay?  OKAY?  I just wanted to know the catch and where the cameras were hiding to catch me when I fell for this trick!!  The young girl stepped away for a few moments when the manager came up and said, "We have a problem with your order.  Would you mind this 6' tripod instead of the 12"  one and we'll throw in a 16 Ultra SanDisk to make it right."
I was seriously speechless
as I walked out the door carrying my new Canon EOS T3i
and accesories

YES VIRGINIA, there really is a SANTA CLAUS!

It only took a tiny bit of snooping to learn "WHO" Santa was
....they'll remain a secret as they wished....